Anne Perry, who has an MA in History, started her career in academia, copy-editing for The Journal of Juvenile Law and Politics at the University of California, as well as researching and teaching at the University of Chicago. In 2007 she made her move into trade publishing launching the review blog Pornokitsch with her husband Jared Shurin, which won them The British Fantasy Award for Best Non-Fiction 2013. From this base, they founded The Kitschies, the hugely successful UK genre Awards for speculative and fantasy fiction, which last year led them to be voted among the Hospital Club’s top 10 most innovative and influential people working in publishing.

In 2012, Perry was hired by Hodder & Stoughton as an Assistant Editor, commissioning genre fiction, developing Hodder’s backlist and digital genre publishing, and building Hodder’s online profile amongst science fiction and fantasy readers with the Hodderscape blog. With a string of brilliant acquisitions under her belt, including Sarah Lotz’s The Three, she was promoted to Editor in under a year. Described by Oliver Johnson, Associate Publisher at Hodder & Stoughton as ‘one of the most talented and innovative young editors in the business’, she was a unanimous choice as this year’s winner.

Anne Perry was the stand-out candidate from a superb shortlist. The judges marvelled at the speed, imagination and determination with which she has championed genre fiction in this country. Anne not only publishes excellent science fiction and fantasy, she also writes it brilliantly. She actively seeks out new readers and has set up The Kitschies Awards, already widely recognised for the quality that it rewards in her chosen field. She is the acme of today’s multi-talented and multi-tasking publisher – a fearless pathfinder who has set a standard to which we should all aspire.

The judges said:
‘Since October 2007 Melissa Cox has proven herself as an energetic and innovative bookseller moving up through Waterstones to become the Children’s New Titles Buyer at Waterstone

s Head Office. Melissa really stood out as a forward-thinking bookseller; she has shown a great depth of understanding with the children’s market and also impressed us with her ability to work with publishers, on everything from developing exclusive products for Waterstones to author rebranding, forecasting stock and negotiating terms. She epitomises the modern-day bookseller who is involved in every area of the business from shop floor children’s bookselling to collaboration with Waterstones’ marketing, digital and related product buying teams. Her energy, enthusiasm and progressive outlook is what made Melissa a strong contender on our shortlist.’

‘I was encouraged to enter the prize by the hugely supportive, albeit anonymous, nomination I received. I remembered reading about the prize last year and I had huge admiration for the shortlisted women so was proud to think that someone considered my contribution to the book industry worthy of being recognised alongside their talent.
I feel incredibly privileged to have been shortlisted, I didn’t think that I stood much of a chance as a bookseller and to get the email whilst I was in Bologna for the children’s book fair was completely thrilling. I’m over the moon to have been included and am really looking forward to meeting the other shortlisted candidates.’

‘Lynsey’s career has been shaped from the outset by a refusal to take no for an answer, choosing to doggedly pursue her keenly attuned instincts despite the obstacles. An early a

dopter of social media, she pioneered its use at Transworld not just as a sales mechanism or a box to tick, but as a crucial tool for our industry’s core function – connecting books with readers. Her understanding of how reading communities discover, enthuse and share – developed via her immaculate consolidation and targeting of Terry Pratchett’s fanbase and honed via her management of the crime site Dead Good – is a priceless contribution to the industry as it adapts to seismic change. Her combination of insatiable curiosity, passion and courage, which lead time and again to innovation and record-breaking results, made Lynsey a clear choice for this year’s shortlist.’

Lynsey said:
‘The prize came onto my radar last year when I was working in Publicity. The winner, Miriam Robinson had such an amazing and positive effect on Foyles; one of my favourite bookshops and has such a passion for communicating with readers. I was inspired by Miriam to apply. I am immensely flattered and was genuinely not expecting to get this far. The amazing things all the shortlistees have accomplished is mind-boggling and I feel very privileged to be in their number.’

‘Sarah’s exceptional six-year career began as an Events Manager for the literature organisation, English PEN. Within five years, Sarah had risen to role of Assista

nt Director as a result of managing a diverse events programme for the charity. From the management of the Pinter Prize, in celebration of long-time supporter of English PEN, Harold Pinter, to the programming of hundreds of author-focused events, she quickly became an advocate for the promotion of free speech in literature. Amongst her achievements was the London Free the Word! Festival, which brought together over 30 writers from across the world. Sarah’s passion for international writers led her to join the Poetry Translation Centre in 2012, where she curates events for and attracts audiences from communities in the UK that don’t traditionally engage with the UK publishing sector. She also works on behalf of the Reading Agency to programme events for World Book Night, the annual campaign to help authors and books to reach a wider demographic. In Sarah’s words, she works in the ‘public arm’ of publishing, and she does so with absolute dedication, skill and passion.’

Sarah said:
‘I’ve been aware of the Kim Scott Walwyn Prize for a couple of years, but it was only this year that I really felt I had reached a stage in my career where my work might be considered. I was speaking to a colleague about how the prize had opened for nominations this year, and she said something about how terrible women can be at putting themselves forward for recognition. That really struck a chord with me. It made me think that it’s really very important that women aren’t afraid to celebrate and show pride in their own achievements.It’s so wonderful to have been shortlisted for the prize. When I look at the list of previous winners and all that they have achieved in their careers, it’s an honour to think that my work might be considered alongside theirs.’

‘After only a short time, Hellie has already made her mark as a force in the publishing industr

y. Launched in her career by Anne Louise Fisher, Hellie learnt the main aspects of agenting at Greene and Heaton, from reading submissions to handling translation and US contracts and building her own list. She moved in 2013 to Janklow & Nesbit to join their team as a full-time Literary Agent. Already recognised as a formidable agent, the fiction and non-fiction that she offers is notable for its quality and for its individuality. Over and above her achievements as an agent, the judges were particularly impressed by the mentoring that she offers up-and-coming colleagues and the networking events that she organises. Her regular appearances at writing festivals as well as her Tales from Paradise event show how inspirational she can be. She goes to great lengths to discover writing talent and to match it with the right editor and publishing house. It was no surprise to the judges that she was featured in The Bookseller Rising Stars list 2013. Hellie Ogden clearly has a bright future and the publishing industry is lucky to have such talent in it as it develops and faces the future.’

Hellie said:
‘This is a prize that recognises women in the industry and that’s something really special which I wanted to be a part of. To be added to the names of amazing women who have been shortlisted in previous years is a real honour. I’m delighted to have got this far!’

erry has a background in research and teaching history at the University of Chicago. However, she has made a swift and deeply impressive mark in publishing in the UK, currently as Editor for genre fiction at Hodder and Stoughton. Anne lives and breathes science fiction and fantasy. She has commissioned and won auctions for major new writers for the Hodder list, and revamped the backlist and the Hodderscape fan website and increased its followers sevenfold. But what impressed the judges especially was Anne’s commitment and energy beyond the day job. In 2007 she set up a brand new award, the Kitschies, which ‘elevates the tone of the conversation around genre fiction’, and which has become a major publishing award. In 2011 she and her husband had an idea for an anthology of genre stories, set up their own press to publish it, formed a partnership with Tate Britain, and went on to publish several more under the rubric Jurassic London. She blogs and reviews and even writes fiction under a pseudonym. The judges felt that Anne’s knowledge about genre readers and how to engage them has a great deal to teach us all about the successful future of publishing.’

Anne said:
‘A few of my work colleagues nominated me; I was very surprised when I received an email telling me that I had been put forward for the prize! It’s an incredible honour to be shortlisted and I’m very proud and humbled.’ 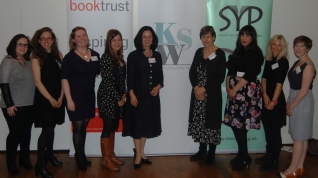 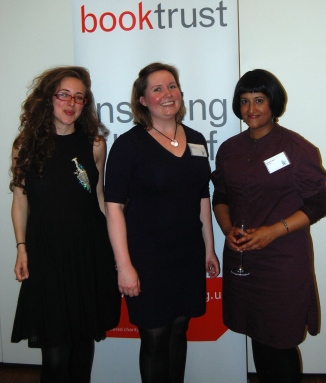 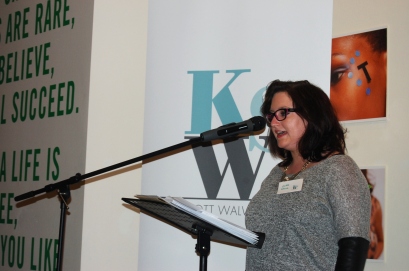